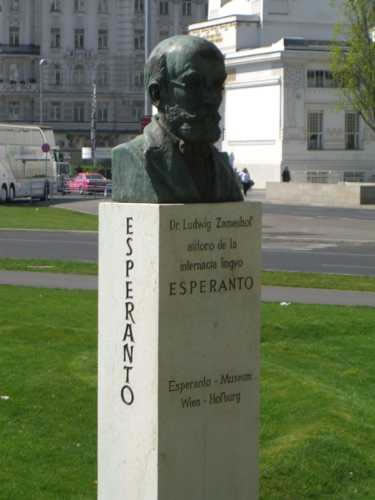 Ludvic Lazarus Zamenhof (born Eliezer Samenhof), 1859 – 1917) was an ophthalmologist, philologist, and the inventor of Esperanto, a constructed language designed for international communication.

As of 1975, Esperanto was taught in 600 schools to 20,000 students per year; and there were about 100 journals and 7500 books written in Esperanto, including translations from 65 languages. In addition, it had by that time been used in more than 700 international conferences. As of 2000, per Cambridge Encyclopedia, it had somewhere between 1 and 15 million speakers, according to sources referenced.

Zamenhof was born in the town of Bialystok (now in Poland, then under Russian rule) to parents of Lithuanian Jewish descent. He considered his native language to be his father´s Russian, though he also spoke his mother´s Yiddish; as he grew older, he spoke more Polish. His father was a German teacher, and he also spoke that fluently. Later he learned French, Latin, Greek, Hebrew and English, and had an interest in Italian, Spanish and Lithuanian.

In addition to the Yiddish-speaking Jewish majority, the population of Bialystok was made up of three other ethnic groups: Poles, Germans, and Belarusians. Zamenhof was saddened and frustrated by the many quarrels between these groups. He supposed that the main reason for the hate and prejudice lay in mutual misunderstanding, caused by the lack of one common language that would play the role of a neutral communication tool between people of different ethnic and linguistic backgrounds.

By 1878, his project Lingwe uniwersala was almost finished. However Zamenhof was too young then to publish his work. Soon after graduation from school he began to study medicine, first in Moscow, and later in Warsaw. In 1885, Zamenhof graduated from a university and began his practice as a doctor in Veisiejai and since 1886 as an ophthalmologist in Plock and Vienna. While healing people there he continued to work on his project of the international language.

In 1879, Zamenhof wrote the first grammar of the Yiddish language. In 1887, the book titled as „Lingvo internacia. Antauparolo kaj plena lernolibro“ (International Language. Foreword And Complete Textbook) was published under the pseudonym „Doktoro Esperanto“ (Doctor Hopeful), from which the name of the language derives. For Zamenhof this language wasn´t merely a communication tool, but a means of spreading his ideas on the peaceful coexistence of different peoples and cultures. Among the many works he translated into Esperanto is the Hebrew Bible or Old Testament.

Outside his linguistic work, Zamenhof published a religious philosophy he called Homaranismo (loosely translated as humanitarianism).

His family name was written Samenhof in German orthography; Zamenhof is an Esperantized spelling.