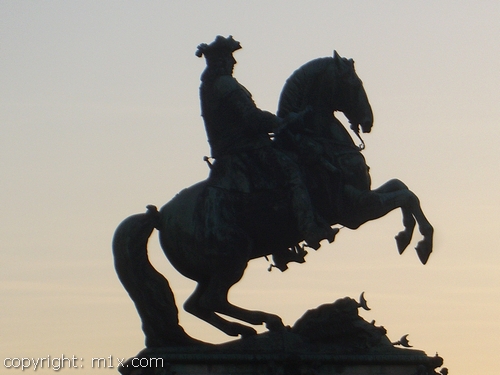 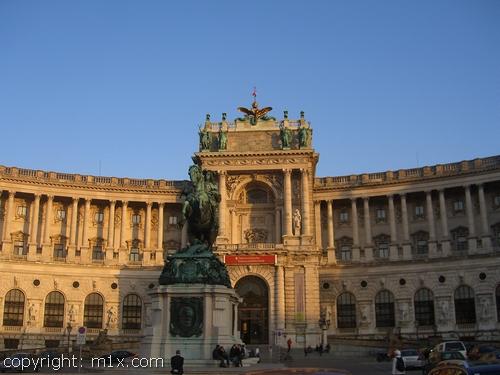 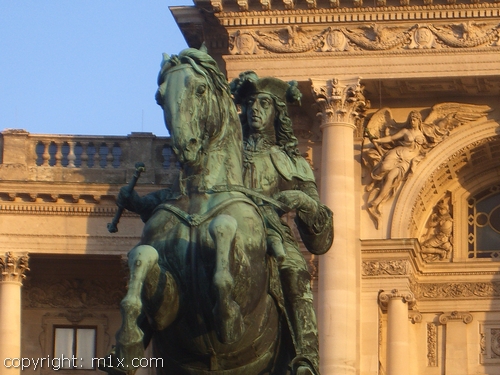 Eugène, Prince of Savoy (known in Austria as Prinz Eugen), b. Paris (France), Oct. 18, 1663, d. Vienna, April 21, 1736, army commander and statesman. Great nephew of Cardinal Mazarin. After being rejected by the French military, he entered the Imperial Army in 1683 and fought in the liberation of Vienna (Turkish Sieges of Vienna), as well as the campaigns in Hungary until 1689; until 1693 fought against the French in Italy; in 1697 became high commander of the imperial army in the Turkish Wars and defeated them at Zenta. From 1700 fought in Italy in the War of the Spanish Succession, and with the Duke of Marlborough (J. Churchill) emerged victorious near Höchstädt in Bavaria in 1704, liberated Turin in 1706, defeated the French (again with Marlborough) in 1708 at Oudenaarde and in 1709 at Malplaquet, but in 1712 was unsuccessful. From 1703 was President of the Court Council of War; had the ramparts around Vienna built (Linienwall) and in 1714 negotiated the Peace of Rastatt. 1707-1716 Governor of Milan, 1716-1724 General Governor of the Austrian Netherlands, then Vicar General in the Habsburg territories in Italy. In a second war against the Turks, E. had a victory at Petrovaradin in 1716 and at Belgrade on Aug. 16, 1717. After this glorious career, he was later reluctant to fight. 1734/35 as Imperial high commander in the War of Polish Succession against France, he had little success. E. was considered an important advisor to Emperors Leopold I, Joseph I and Karl VI (great power of the Baroque age), as well as being one of the most important building patrons of the Baroque period. His winter palace in Himmelpfortgasse in Vienna (now the Ministry of Finance) was built by J. B. Fischer von Erlach and J. L. von Hildebrandt, Belvedere Palace and Schloßhof Palace in Marchfeld were built by J. L. von Hildebrandt. Prince E. was a great lover of books („Eugeniana“ in the Grand Hall of the Austrian National Library) and collector; he kept a menagerie in Belvedere Palace. He did not marry. His gravestone is in St. Stephen´s Cathedral, and a monument to him stands on Heldenplatz (A. D. von Fernkorn, 1865). Other monuments can be found in Budapest and Torino, apotheosis by B. Permoser in the Lower Belvedere; numerous paintings, busts, and other works document E.´s accomplishments.
Source: aeiou.at