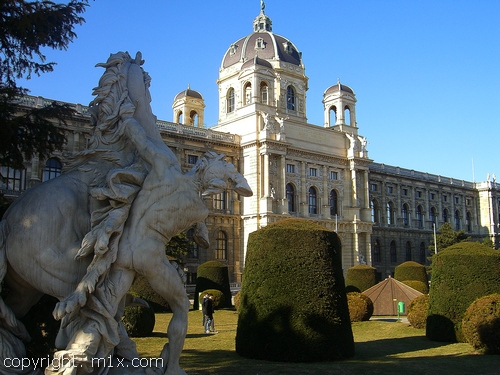 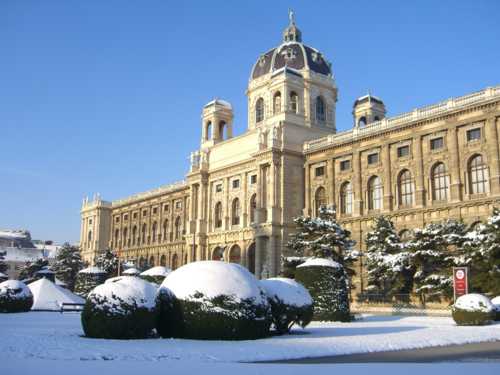 Museum of Natural History (Naturhistorisches Museum), Vienna, founded in 1748 by the Emperor Franz I as „Naturalien-Cabinet“ of the Viennese Court after purchasing the collections of the Florentine Jean de Baillou (about 30,000 minerals, shells, etc.). The collections, which had been housed in the court library and systematized according to strict scientific principles right from the beginning were handed over to the State and opened to the public by Maria Theresia. Franz II added a zoological (1796) and a botanical collection (1803) then called the „Vereinigten Naturalien-Cabinete“. Emperor Franz Joseph finally brought the two separately stored holdings into a sumptuous new building on the Vienna Ringstrasse and called it the Naturhistorisches Museum (opening August 10, 1889). The building was the first of two Court Museums built by G. Semper and C. Hasenauer (1871-1881).
Its counterpart is the Kunsthistorisches Museum.

In the new building an anthropological and a prehistorical collection were added, which includes the Venus von Willendorf, objects from the burial sites at Hallstatt and the Langobard barrows in Lower Austria. The Museum of Natural History is made up of 6 departments (mineralogical, geological-palaeontological, prehistorical, anthropological, zoological (on the upper floor) and botanical with about 3 million sheets of dried plants). Its collection of meteorites (900 pieces) is the world´s largest permanent exhibition of this kind. Apart from its collections, the Museum of Natural History is famous for its scientific research activities. It was enlarged and modernised (subterranean depot) until 1994. In 1994 B. Lötsch took over the management of the Museum, which had previously been managed by the Ministry of Science and Research. Since 1995 it has been under the supervision of the Ministry of Education and Cultural Affairs.
Source: aeiou.at