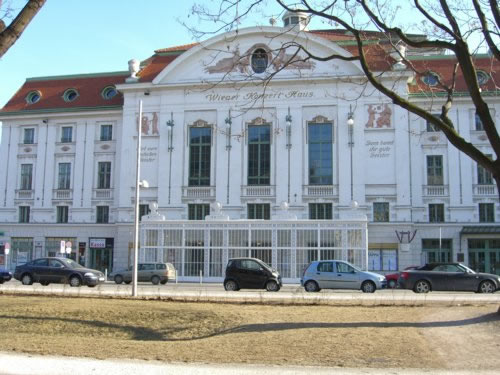 The Konzerthaus in Vienna was opened 1913. The idea of the new multi purpose building was to be more interesting to the broader public than the traditional Wiener Musikverein. In addition to the concert hall, the first drawings by Ludwig Baumann for the Olympion included an ice-skating area and a bicycle club. In an attached open air area 40,000 visitors would be able to attend events. The drawings were not accepted. However, today an ice skating area is situated right next to the building.

The Konzerthaus was finally built between 1911 and 1913. The architects were Ferdinand Fellner and Hermann Helmer (Büro Fellner & Helmer); the work was done in cooperation with Ludwig Baumann.
The building had originally three halls, in which there can be simultaneous concerts, since they are sound-proofed. The original art nouveau building was partly destroyed during renovations and adaptions, but the building was reconstructed from original sketches in the 1970s.
Großer Saal, with 1,840 seats. Mozartsaal, with 704 seats. Schubertsaal, with 336 seats. Neuer Saal was added during the latest renovations.

The Konzerthaus has the Vienna Symphony Orchestra, the Wiener Kammerorchester, the Wiener Singakademie and the Klangforum Wien in residence. Several subscriptions also include concerts by the Vienna Philharmonic Orchestra and other organizations.

The Wiener Konzerthausgesellschaft also conducts several Festivals during the year.