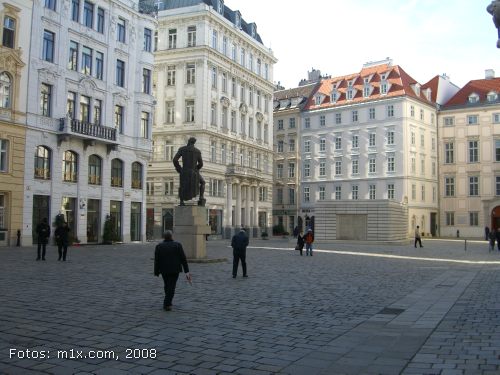 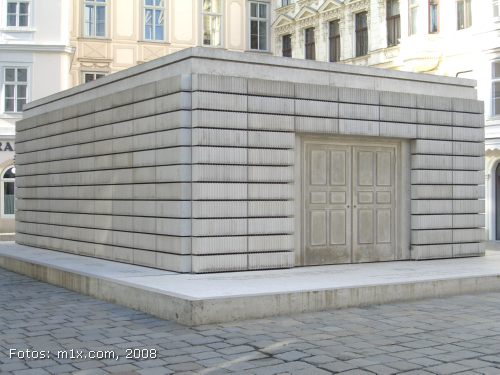 Judenplatz was the center of Jewish life and the Viennese Jewish Community in the Middle Ages.
Archaeological excavations of the medieval synagogue are viewable underground by way of the museum on the square, Misrachi-Haus (Nr. 8). The persecution of the Jews in the autumn of 1420 grew to a bloody climax in 1421.

Memorial to Austrian Holocaust Victims, a project based on an idea of Simon Wiesenthal and unveiled in 2000. Created by British artist Rachel Whiteread, the memorial is a reinforced concrete cube resembling a library with its volumes turned inside out. At the base the names of the Nazi concentration camps sites. 65,000 Austrian Jews were murdered by the Nazis.

Monument to the German poet Gotthold Ephraim Lessing created by Siegfried Charoux. The monument was completed unveiled in 1935, and soon removed in 1939 by the National Socialists to be melted down for the purpose of making weaponry. From 1962 to 65, Charoux created a second Lessing monument out of bronze.

Lessing´s „Ringparabel“ in the drama „Nathan der Weise“ is considered a key text of the Enlightenment and helped in the formulation of the idea of tolerance.
Source: wikipedia.org